In Remembrance of Ronald Rinkenbaugh 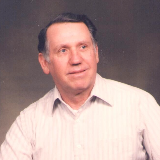 He was born on September 8, 1936, to Roger and Evelyn (Carpenter) Rinkenbaugh in Richmond, MO. Ron grew up in Kanas City and graduated from East High School and attended Maple Woods Community College. He served his country in the United States Air Force.

On September 4, 1965, he was united in marriage to Janet Louise Breig. After their marriage they lived in Kansas City where they made their home.

Ron worked as a fireman for the railroad and later retired as an inspector from TWA/American Airlines after 30+ years of service.  He was a member of the 303rd Air Refueling Wing in Bermuda, the American Legion in Richmond, MO and the NRA.

His hobbies were flying, model railroads and he loved doing anything mechanical. Ron enjoyed camping and most of all being with family. His ultimate daily goal was to make everyone laugh. He was a wonderful husband, dad, papa and friend who will be missed dearly.

He was preceded in death by his parents; his brother and sister-in-law Roger and Esther Rinkenbaugh; his sister Freda Rinkenbaugh and his nieces Sylvia Rikard and Willa Lambros.