In Remembrance of Mary Stubbs 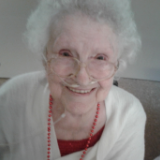 She was born on January 20, 1925 to Albert James and Martha (Krasnicki) Karis in Minersville, Pennsylvania and grew up in Southern California.

On February 2, 1946 she was united in marriage to Donald Stubbs in Southern California. After their marriage they raised their family in southern California and later moved to the Kansas City area. In 1999 they moved to Smithville. Her husband, Donald, passed away on September 3, 2012.