In Remembrance of Charles Atchison 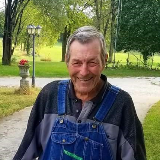 He was born on October 22, 1933, to Benjamin Franklin and Callie (Stacey) Atchison in Oasis, MO. Charles grew up in Omaha, Arkansas where he attended school.

On July 9, 1953, he was united in marriage to Billie Carpenter. After their marriage they lived in Arkansas and later moved to Kansas City where they made their home. Billie passed away on November 27, 2014.

Charles was worked in concrete for over 60 years. He enjoyed fishing, hunting, and being outdoors.

He was a member of the Mt. Zion Baptist Church in Edgerton, MO.

Inurnment will be held at a later date at Omaha Cemetery, Omaha, Arkansas

Donations may be made to the Omaha Cemetery.