In Remembrance of Willadeen (Peck) Nation 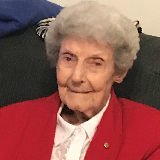 She was born on September 21, 1924 to William Clyne and Mary Martha (Harris) Peck in Paradise, MO. She grew up and attended school in Springfield, MO and Rogersville, MO.

Willadeen lived in Springfield, moved to Smithville in 1944, later moving to Trimble. In 1982 she moved to Liberty