In Remembrance of Wendell H. Pittsenbarger 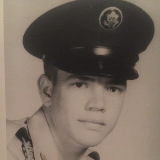 Wendell Hess Pittsenbarger, 70, of Smithville, MO passed away February 10, 2020 at his home.

He was born on December 13, 1949 to Bobby Gene and Doris Jean (Daniels) Pittsenbarger in Maryville, MO. He grew up in Kansas City and graduated from North Kansas City High School. Wendell then served his country as a Sergeant in the U.S. Army during the Vietnam War. He proudly served for the 25th division 1st of the 5th mechanized.

After his honorable discharge he lived in Fairplay, Colorado and in 1975 he moved back to Kansas City, MO. He later moved to Smithville where he made his home.

Wendell owned and operated his own gun shop and repair shop. He also worked for Simmons Guns and Cosentino’s Price Chopper.

Wendell was proud of his country and his service. He enjoyed the outdoors, fishing, and hunting. Most of all he loved being around his friends and family.

He was preceded in death by his father, his wife Patricia, and son Dominick.

Military Honors at 6:00 p.m. Monday, Feb. 17th at the Smithville American Legion with Celebration of Life and Visitation following.

Donations may be made to Hixson-Klein Funeral Home.