In Remembrance of Wayne Adkins 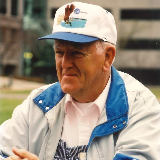 Wayne was born at his family home in Dearborn on March 14, 1928, as the son of Elmer and Dixie (Babcock) Adkins. He attended multiple small elementary schools in Platte County before graduating from Faucett High School in 1946. He was drafted into the U.S. Army in 1951 and after serving his country during the Korean War, Wayne came home to marry his sweetheart of eight years, Nigel Faye Morgan.

He began farming with his father and older brother at the young age of 11. He and his brother worked together on a steel-wheeled tractor, one working the pedals and one working the steering wheel. At this same age, he drove a sickle mower behind a team of work horses helping to keep grass and weeds clear from the fields of crops. He learned early how to prepare for life as a fulltime farmer. Wayne and Nigel raised their family on a farm outside Camden Point.

Wayne was an investor of time, talent and finances. He many times did without so that others’ needs could be met and adopted the values of hard work and discipline to create a life well lived. He also embraced a saying in his later years of “Every day is a good day. Some are just better than others.”

Wayne was a long-time deacon and member of the First Baptist Church of Dearborn and later a member of Mt. Zion Baptist Church of Edgerton. He served on numerous teams of the Master’s Builders helping build and renovate churches across the United States.

Due to Covid-related outbreaks in northern Platte County, only a small, family graveside service will be held at this time with a public Celebration of Life to be offered in the future. Cards may be sent to 12730 Z Hwy, Dearborn, MO 64439.