In Remembrance of Verda Dakin 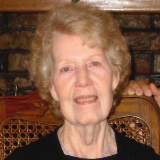 She was born on October 2, 1924 to Prince Charles and Jane Ellen (Roberts) McDowell in Frazier, MO. Verda grew up near Gower and graduated from Gower High School.

On November 28, 1942 she was united in marriage to Paul William Dakin. After their marriage they lived in St. Joseph where they made their home. Her husband preceded her in death on November 20, 1997.Verda was a bookkeeper for Polsky Motors and Farris Truckline for many years. She was active in the American Business Women’s Association, where she had served as President.

Verda was a longtime member of the King Hill Baptist Church, currently known as Journey Baptist Church. She taught Sunday School, was active in Missions, and volunteered and prepared food for the Soup Kitchen.