In Remembrance of Twila Ellington 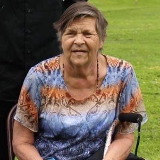 She was born on July 3, 1955  to David Eugene and Crystal Irene (Gleaves) Heinrichs in St. Joseph, MO. Twila grew up in Easton and graduated from East Buchanan High School. On July 18, 1980

Twila was united in marriage to Jerry Ellington. After their marriage they lived in Easton where they made their home. Her husband, Jerry, passed away March 26, 2019.

Twila served in the Air National Guard and was a member of the Eastern Star in Stewartsville. Twila served her community as the Mayor of Easton and managed the Senior Housing in Easton and Gower. She loved gardening, ceramics and craft shows, and most of all her spending time with her granddaughter, Deanna and great-grandchildren. Twila and Jerry also enjoyed auctions and garage sales.

Twila worked for B&B Marina in Smithville, H&R Block, the Gower Convalescent Center, and was a tax consultant for many years.

She was also preceded in death by her father; son, James Ellington; and grandson, Curtis Reed.