In Remembrance of Tommy McKown 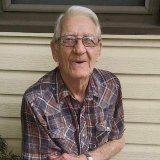 He was born on January 3, 1935 to Earl Thomas McKown, Sr. and Olive Irene (Wohglemuth) McKown in Excelsior Springs, MO and grew up and attended school in Carrolton, MO where he met Mildred.

On July 29, 1953 he was united in marriage to Mildred Norine Ford. After their marriage they made their home in Smithville. Mildred passed away on November 3, 2011.

Tommy worked for Central Storage in Kansas City, retired from the Smithville School District and had held several other jobs. He was known for making coffee and visiting with friends at the local businesses in town and would call himself the “best boy in town”. Tommy never knew a stranger, young or old and was a jack of all trades. He loved being a dad and grandpa, and never got tired of welcoming the new babies.

He was preceded in death by his wife Mildred McKown; his parents Earl and Olive McKown and seven brothers and sisters.