In Remembrance of Simeon "Rusty" Turner 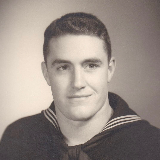 He was born on April 12, 1933 to William Lewis and Gertie Lee (Herndon) Turner in Camden Point, MO. He grew up in the Camden Point and Dearborn area and graduated from Dearborn High School. He then served his country in the U.S. Navy during the Korean War.

On September 17, 1955 he was united in marriage to Kay Eckholdt. After their marriage they lived in Platte County where they made their home.

Simeon worked for TWA as a mechanic and retired as a supervisor after 42 years. He enjoyed farming for many years.

He was preceded in death by his parents; brothers, John and Bill Turner; step-father, Truman Buckler; and step-brother Truman Lee Buckler.

Donations may be made to Hoover Christian Church or donor's choice.