In Remembrance of Shirley Zismer 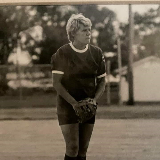 She was born on May 12, 1933 to Loren George and Evelyn Marie (Blackmoore) Bentley in Kansas City, MO. Shirley graduated from North Kansas City High School in 1952.

Shirley lived in Paradise, MO where she raised her family. She worked as a cook at the Spelman Memorial Hospital in Smithville for over 20 years. Shirley was a local legend on the softball field and was known for her dominate pitching and she enjoyed playing golf. She was an artist and loved to paint and draw.