In Remembrance of Shirley Owen 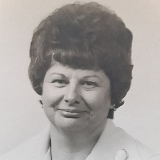 On May 31, 1951 she was united in marriage to James Owen. After their marriage they lived in Smithville where they made their home.In addition to being a homemaker,

Shirley was a active member of the First Christian Church in Smithville. She served on the Smithville Housing Board for several years. Shirley loved reading, travelling, quilting, and coloring.

She was preceded in death by her parents; sisters, Verna Blair and Edna Mae Fisher; and daughter, Karry Lyn Owen.

Funeral Service: 12:30 p.m. Wednesday, October 16th at First Christian Church in Smithville with visitation from 11am-12:30 pm prior to the service.

Donations may be made to the church, cemetery or Albert and Emma Owen Scholarship Trust