In Remembrance of Sherry Wright 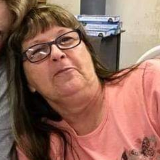 She was born on May 15, 1956 to Lloyd Harold and Marilyn (Russell) Albertson in St. Joseph, MO. Sherry grew up in Agency, MO and graduated from Nixa High School.

Sherry worked as an administrative assistant at the Smithville Housing Authority for 12 years. She enjoyed reading, fishing, birds and flowers.She was preceded in death by her father.

DUE TO RAIN, THE SERVICE IS NOW AT THE FUNERAL HOME IN GOWER