In Remembrance of Scrooge Hensley 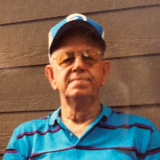 Masks will be required but not provided

He was born on August 18, 1938 to Samuel C.F. and Dorothy Ellen (Belcher) Hensley in Dearborn, MO where he grew up and in 1956, he graduated from North Platte High School. He then served his country in the U.S. Army.

He was preceded in death by his parents C.F. and Dorothy Hensley and his wife Edna Mae Hensley.

Donations may be made to Alzheimer’s Association to help fight Alzheimer’s.