In Remembrance of Ruth Waters 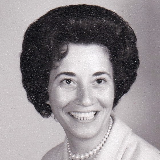 She was born on July 22, 1932 to the late Ellis and Trella Gordon in Plattsburg, Mo. She was united in marriage to Lewis Richard Waters on December 15, 1950. Ruth and Lewis shared 70 years of marriage and made a wonderful home for their family.

Ruth, whose nickname was “Deanie”, was a devoted wife, mother, and grandmother. She had a career as a seamstress for Linda Lane, Nelly Don, and Mendel Garment Factories and as a technician for Harrisonville Harness. After retiring, she lovingly hand-stitched many beautiful quilts for friends and family. She was well known for her straight talk, her sense of humor, and her love for family. No services are planned at this time.