In Remembrance of Robert "Bob" Hale 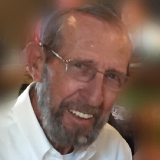 He was born on June 18, 1932 to James and Mildred (Boyd) Hale in rural Columbus, KS. Bob graduated from Columbus High School in 1950. As a young man he farmed with his father and developed a love for horses. He later delivered milk for Page Milk Company of Coffeyville, KS. Rather than being drafted he joined the newly formed United States Air Force in 1952. He served 4 years as an aircraft mechanic crew chief in England and Maine. Most of Bob’s work life was with Trans World Airlines after having spent short stints at Boeing and Sikorsky after the Air Force.

On May 25, 1963 he was united in marriage to Marcelle “Marcy” Quick. She preceded him in death in 1978. Bob joined TWA in 1965 as a jet engine cowling machinist, later becoming an inspector. He was a member and solid supporter of International Association of Machinists Local 1650 and was elected treasurer several terms. In 1979 Bob married DeLores “Dee” Campbell. After their marriage they lived in Plattsburg, and in 1984 they moved to Trimble where they made their home. They were married until Dee’s sudden death in 2010.

Bob retired from TWA in 1994 with 29 years with the company. Bob was not one to sit around after retirement, he and his wife Dee, started an insurance business working for Modern Woodman until the death of Dee. Bob had a passion for politics. He was a staunch supporter of the Democratic Party. He also served as the Mayor of Trimble. Bob was a gifted man, building and restoring things, and spending relaxing times in his shop. He had a love of all animals and helped in animal rescues by helping no-kill shelters. His passion of aviation showed by just not having worked in the aviation industry, but for a period he co-owned a single engine aircraft that he was licensed to fly.

Bob also participated in many civic organizations: Masonic Lodge 113 AF&AM, Garland Chapter 287 of the Order of the Eastern Star, American Legion Post 97, 32nd Degree Mason of the Scottish Rite of Free Masonry, and a member of Ararat Shriners.

Donations may be made to VWF 1773 in Carrollton or American Legion Post 0097 in Plattsburg.