In Remembrance of Richard Reed 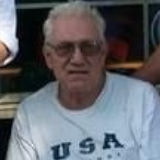 He was born on October 4, 1945 to John Orin and Ruth (Pecha) Reed in Wausau, Wisconsin. Richard grew up in Mosinee and graduated from Mosinee High School. He then served his country in the US Army.

On November 19, 1966 he was united in marriage to Betty Jean Taken. After their marriage they lived in Mosinee, WI, Toronto, SD, Kansas City, KS and made their home in Trimble, MO.

Richard was a member of the Trimble Lions Club and was a volunteer fireman.

He was an over the road truck driver and a mechanic. He enjoyed hunting, fishing, gardening and was an avid NASCAR fan. Richard loved his family and his grandchildren were the highlight of his life.