In Remembrance of Rhonda Dittmar 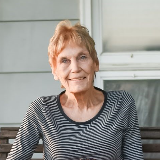 She was born on May 27, 1950, to Ralph and Alva (Carr) Lambert in Albuquerque, NM. The family moved to Salina, KS when she was a child. Rhonda grew up in Salina, KS and in 1968, she graduated from Salina High School. She later graduated from Missouri Western State College in St. Joseph with a degree in Biology.

On September 9, 1972, she was united in marriage to Glenn E. Dittmar. After their marriage they lived in St. Joseph and in 1974 they moved to Agency where they made their home and raised their family.

She was a member of the Mt. Zion Baptist Church in Edgerton.

Rhonda retired from Boehringer Ingelheim in 2015. She enjoyed spending time in her flower garden, landscaping and was an avid reader. Rhonda loved cooking Sunday dinners and spending time with her family, especially her grandchildren and great-grandchildren.

She was preceded in death by her parents Ralph and Alva Lambert and her sister-in-law Francie Lambert.