In Remembrance of Rex Grisham 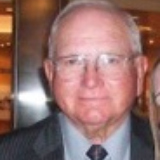 On August 18, 1957 he was united in marriage to Anna Lou “Lukie” Stanton.   After their marriage they lived in Gower where they made their home. His wife, Lukie, preceded him in death on November 9, 2014.

Rex was a farmer, and worked at Purina, E&M and owned and operated a plumbing business. He was very involved in the Gower community and enjoyed attending his grandchildren’s activities.

Rex was also preceded in death by his parents.

Donations may be made to East Buchanan FFA.