In Remembrance of Rebecca Wohlford 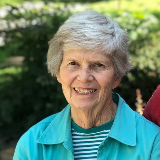 She was born on August 2, 1939 to Scott and LaMera (Gibson) Lowman in Smithville, MO. Rebecca grew up in Smithville and graduated from Smithville High School. She later received her bachelor’s degree in Education from William Jewell.

On August 26, 1962 she was united in marriage to Jonathan Wohlford. After their marriage they lived in Savannah, St. Joseph, and Liberty. In 1969 they moved to Trimble where they made their home. Her husband, Jon, passed away, January 25, 2003.In her early years she was a PE teacher and girls basketball coach at Savannah High School. After Rebecca stayed home and raised her children, she hung wallpaper and was the clerk at the Trimble Water District for over 20 years.

Rebecca was a member of the Paradise Methodist Church. She loved gardening, watching her grandchildren play sports, and helping others.

She was also preceded in death by her parents.

Donations may be made to the Paradise Methodist Church.