In Remembrance of Rebecca "Becky" Robb 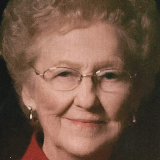 She was born on December 7, 1926 to Spencer Claud Wilson and Susan Julia (Wright) Wilson in Ridgely, MO. Becky graduated from Edgerton High School and she then attended William Jewell College.

On July 29, 1945 she was united in marriage to James Frazier Robb. After their marriage they lived in the Nashua Community in Kansas City North and in 1974 they moved to Platte Woods, MO where they made their home. Her husband, Jim, preceded her in death on December 11, 2011.

Becky was a grade school teacher at Ridgely School. In 1958 Becky and Jim began their 40-year career with State Farm Insurance.

She was a member of Assembly of God Church since 1939. In 1958 she joined the North Kansas City Assembly of God which later became the Northland Cathedral. Becky was very involved in Sunday School. She was also PTA president at Nashua Elementary for many years and was an avid Royals Fan.Becky was also preceded in death by her parents; and siblings, Lorene Wilson, Mattie May Blankenship and Claudie Wilson.

She is survived by her son, Randall L. Robb; daughter Lynn Robb Patton and husband Andy; grandson, Drew Patton and fiancé Jillian Wisdom, all of Kansas City North; several nieces and nephews, other relatives and many friends.

Donations may be made to Northland Cathedral.