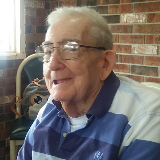 He was born on July 13, 1935 to Truman Calvert and Louise (Rutherford) Buckler in Rushville, MO. Truman grew up near Camden Point where he attended school.On February 21, 1978 he was united in marriage to Betty Lou McMillian. After their marriage they lived in Dearborn where they farmed and made their home. After their retirement they moved to Climax Springs, Lake of the Ozarks for a few years and then returned to Dearborn. His wife, Betty, preceded him in death on March 28, 2016.

Truman was a member of the Masonic Lodge in Camden Point.