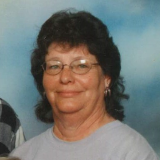 She was born on February 4, 1947 to Raymond Edward and Marie Elise (Rottmann) Sprick in Washington, MO. Sue Ellen grew up in Warrenton and graduated from Warrenton High School, and later graduated business college in Jefferson City, MO.

On June 9, 1984 she was united in marriage to Dave Roberds. After their marriage they lived near Dekalb and in 2001 moved near Dearborn where they made their home. Dave passed away on May 23, 2019.

She worked as a secretary for Associated General Contractors of America (ACG) and Builders Association both in Jefferson City, MO and later worked for the State of Missouri License Bureau in Platte City. SueEllen was also an Avon Representative in Platte County for many years. Mostly she enjoyed chasing Dave around the farm.