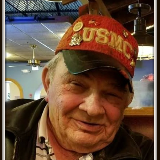 He was born on August 10, 1937 to Lawrence and Mary (Cisper) Diebold in Kansas City, MO. He grew up near Signal Hill in Kansas City, MO and attended school. Ron then served his country in the U.S. Marine Corps.

On December 24, 1964 he was united in marriage to Donna June Harvey. After their marriage they lived in Kansas City, in 1972 moved to Edgerton, and 2003 moved to Smithville. His wife, passed away on November 24, 2016.He worked for Kenworth Trucking Company and Kansas City Cold Storage. After his retirement he worked at Smithville Living Center and Pack’s Hardware.

Ron was proud to be a Marine, enjoyed Barbecuing, drinking a few beers, fishing and traveling. He loved spending time with his family and friends.

He was also preceded in death by his parents, great-granddaughter, Maria Rose Nelson; brother Gene; and sisters, Juanita and Judy.