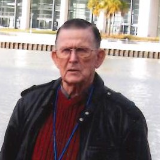 He was born on May 18, 1923 to Ralph and Maudaline (McMillian) Masoner in Edgerton, MO where he grew up and attended school. He then served his country in the U.S. Army during WWII.

On February 17, 1944, he was united in marriage to Helen Pauline Heiserman in Kansas City, Kansas. After their marriage they lived in Edgerton where they made their home. Helen passed away on January 9, 1993.

R.L. was a lifelong active member of the Mt. Zion Baptist Church. He was also a member of Edgerton American Legion Post where he received his 70 year pin.

R.L. worked for Davis Paint in North Kansas City where he retired in 1985. After his retirement he worked for Clay County Parks and Recreation where he worked until he was 92 years old. R.L. enjoyed fishing and being outdoors.