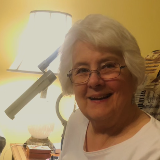 She was born on January 4, 1936 in Colfax, Iowa. Pat grew up in Colfax and graduated from Colfax High School in 1954. She then attended Drake University where she received her Associate Degree.

On December 29, 1957 she was united in marriage to Maurice Eugene Hesson. After their marriage they made their home in Gower, MO. In 2004 they moved to St. Joseph. Her husband, Maurice, preceded her in death on August 18, 2020.

Pat was a bookkeeper for Gower Lumber, an Administrative Secretary for Sheraton Hotel in St. Joseph, and a Secretary for the City Clerks Office of St. Joseph. Pat’s passion was music and she was a long standing member of the St. Joseph Community Chorus and Chamber Choir.

She was also preceded in death by her father, Norman Carey Case; her grandmother that raised her, Melissa Irene Case; and brother George Benjamin Case.

In lieu of flowers donations may be made to Journey Baptist Church for Faith For Future.