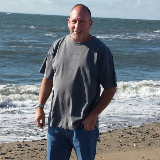 Mickey was born in Stratford, Connecticut to Clarke and Barbra Cross on October 30th, 1961. He went to Stratford High School and graduated in 1979. Shortly thereafter he joined the Army and proudly served his country for 18 years and retired in 1997. In 2001 he began his employment for the postal service in Smithville, Missouri and happily retired in September 2021. He dedicated himself to a life of public service and will be very missed by his community, coworkers, family, and friends.
Mickey reunited with his high school sweetheart and love of his life Joyce VanGrowski, they married in the fall of 2008.
He is survived by his wife of 13 years, Joyce Cross of the home; father Clarke Cross of Stratford, Connecticut; brother Jay Cross Sr. of Hamden Connecticut; his 2 sons Shawn Cross and wife Stephanie of Kansas City, Missouri and Alex Cross and wife Lauren of Smithville, Missouri and their children Avery and Rian; stepson Victor Dowgiallo and his fiancé Meghann of Milford, Connecticut; Sisters-in-law Patricia Smith and fiancé Paul of Marble Head, Massachusetts and Arlene VanGrowski of Seymour, Connecticut, and a host of cousins, nieces and nephews.
His grandparents and his mother Barbra Cross preceded him in death. Mickey thoroughly enjoyed the outdoors. Joyce often joked if you couldn’t find him to first check the yard as he was passionate about maintaining a beautiful property, then check the pool. He could also be found kicked back in front of the television enjoying a sporting event. He never shied away from hard work, often rolling up his sleeves to get things done himself. He also loved planning trips home to Connecticut to reconnect with family and friends.

A Memorial Mass will be held in Stratford, CT at a later date.

Donations may be made to Friends of Megan’s Paws and Claws. Donations can be mailed to the funeral home: PO Box 167, Gower, MO 64454