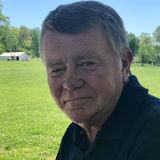 He was born on January 5, 1960 to William F. and Shirley A. (Courtney) Hill in St. Joseph, MO. Mark grew up in Camden Point and graduated from North Platte High School in 1978.

On February 10, 1990 he was united in marriage to Cindy Matthews. After their marriage they lived in Platte County where they made their home.

Mark loved to travel and was a huge history and genealogy buff . He enjoyed cruising in Miss Daisey his 71 Camero and took pride in his community.

Mark was preceded in death by his father.