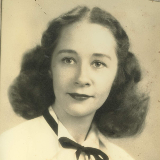 Lula Margaret Durham was born on January 14, 1920 to her father, Silas L. Durham M.D. and her mother Ann Buchanan Durham. She was born in the same house that she passed away in on May 24, 2021. She was one of four siblings, with two older (James Dudley and Helen Durham Aufranc) and one younger, Silas Durham, Jr.

She first went to school in Dearborn, later moving on to receive her higher education at William Woods and she received her Bachelor of Arts from the University of Iowa. She was elected to Phi Beta Kappa. She also studied at the Goodman Theater in Chicago. She received her master’s degree at UMKC and had five summers towards her doctorate at KU.

Lu began teaching high school drama locally, in both Dearborn and Edgerton. She later moved to St. Joseph, where she taught at Benton High School. She then got a job at Missouri Western State College and was at their ground breaking. She taught speech and theater there and produced their first play, The Fantastics.

To many, retirement means a time of rest. That was certainly not the case for Lu. After retirement from teaching, she continued to teach in as many ways possible. One of her great loves after education was the preservation of history. She became involved with the Platte County Historical Society and she served as a docent at the Ben Ferrel Museum in Platte City.

In Dearborn, she helped to establish the World War II Veterans Memorial. She has compiled a book about all the veterans from Dearborn who served in any war. She has also compiled much not only on the history of the community, but also the genealogy of any local families. All of these can be found in the Dearborn branch of the Mid-Continent Public Library.

Among many other things, Lu worked toward the restoration of the Pleasant Grove Cemetery. She was also a driving force behind seeing the North Platte Historical Society and Cultural Center open. Lu was an avid volunteer, genealogist and long-time KC Royals. KC Chiefs and KU Basketball fan.

In lieu of flowers, donations may be made to the Lu Durham Scholarship Fund, mailed to Kara Yarc 9609 SE State Rt 116 Dearborn, MO 64439