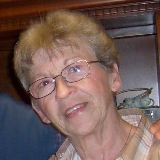 She was born February 6, 1943 to Harold Allen and Mavis Arlene (Erwin) Apel in Sabetha Kansas. Linda was baptized at the First Presbyterian Church in Falls City, NE. Linda was an only child, but she would tell people that she had 20 first cousins, as she had 10 on her father’s side and 10 on her mother’s side of the family. She was proud of her German heritage and was raised and attended school and graduated from Falls City High School with the class of 1960. Following high school, she attended Kansas City Business College.

On May 8, 1986 she was united in marriage to Larry Baber and they made their home in Camden Point, MO eventually settling in Platte City in February 2020. Linda worked for Farmland Industries in Kansas City MO for over 20 years retiring in the year 2000. Linda loved animals and cared for them. She enjoyed going to the casinos and especially loved being around her family and friends.

Linda was preceded in death by her parents and her beloved daughter, Carrie Boswell-Dall on April 26, 2016.

Linda is survived by her husband Larry, of the home, her son Chris Boswell, her five grandchildren: Joseph and Jackson Lamley and Taylor, Milana, and Charlee Baber, her sister-in-law Beverly Hershley, eighteen first cousins, other relatives and many friends.

Donations may be made to Three Rivers Hospice or the Humane Society.

Memorial Visitation will be held Monday, January 17th from 5:00-7:00 p.m. at the Hixson-Klein Funeral Home in Smithville, MO.