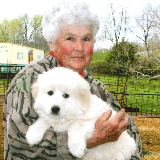 She was born on March 24, 1930 to George Benton and Tacie Leona (Maddox) Mumford in Gower, MO. Leona grew up near Gower and graduated from Gower High School.

On March 24, 1950 she was united in marriage to Robert Franklin Tanner. After their marriage they lived near Gower where they made their home. Her husband, Franklin, passed away, January 16, 2009.

She loved to square dance, enjoyed horse shows, and was an avid animal lover, especially her dogs. Leona worked on the farm with Franklin throughout their lives together and they also helped Davey at his Auction Barn.

Leona is survived by her special friend, Mark Bunn; her girls, Sharon and Karen; several nieces and nephews, other relatives and many friends.

Funeral Services: 2:00 p.m. Friday, January 27th at Hixson-Klein Funeral Home, Gower with visitation one hour prior to the service.

Donations may be made to Number Six Cemetery.