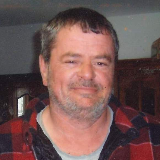 He was born on February 8, 1965 to Lewis Sylvester and Colleen Rae (Wilkerson) Seckel in Leavenworth, Kansas.

Kevin grew up in Camden Point and graduated from North Platte High School in 1983.

On January 1, 2015 he was united in marriage to Kelly Blount. After their marriage they lived in rural Dearborn where they made their home.

Kevin enjoyed his job as a heavy machine operator until he was no longer able. He was a wonderful cook, great carpenter and could fix anything. Kevin enjoyed being outdoors, hunting, fishing, mushroom hunting, camping, canoe trips and playing cards. He loved caring for animals and most of all being with his family and friends.

He was preceded in death by his parents Lewis and Colleen Seckel; sister Kathy Jolly and uncles Fuzz and Harvey Seckel.

Family Burial will be held later at Camden Point Cemetery.

Donations may be made in Kevin’s memory to Hixson-Klein Funeral Home.