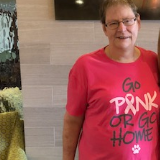 My sis, Kelly Diane Bentley (Thome), entered this world on October 2, 1962, doing things “Her Way” much to the chagrin of our parents, Patricia and Raymond Thome. Now when I say doing it “Her Way” that is the way it was for Sis. Never the one to conform – never the one to follow blindly. If the crowd went left in life, Kelly went right. It defined who she was and she never wavered from “Her” directions.

You know how parents attempt to mold their children in their images? Well ours were no different. Our mother was a great cook. She did her best to make Kelly proficient at and develop an enjoyment for cooking. It didn’t work. Hamburger Helper was developed for my Sister. Kelly’s only contribution to the culinary scene was vulcanized Jello. It is a long story – one I never let Sis forget. Let’s just say Michelin now has the formula.

Dad always had, what he considered, great advice for Sis – and she always did the opposite. You would think that in the 57 years Kelly spent on this earth, Dad would have figured this out and used the ole’ reverse psychology on her. He never did. Obviously Kelly got her smarts from Mom.

We all have accomplishments in life and Kelly was no exception. Among her greatest ones were her two children - Rebecca Stone (Looney) and Brandon Bentley. Rebecca married Trace Stone and gave Kelly three grandchildren – Jordan, Taylor and Jason Stone. They were truly the light of Sis’s life. Kelly spent so much time at Trace and Rebecca’s with the grandkids that Trace lovingly referred to her as his “fourth kid”. It was “lovingly” wasn’t it Trace?

Like everything else she did, Kelly left this world in her own way. On October 16, 2019 in the early hours of the morning (Mind you Sis was NOT a morning person), she decided her work on earth was done and left us to be with Mom. She fought the good fight against cancer for many years.

While we always called Kelly a pain in the rear, she was “our” pain and we will miss her greatly. I never said this enough but “I love you”. Rest in peace Sis and say “Hi” to Mom.

Family graveside services will be held, please contact them for more information.