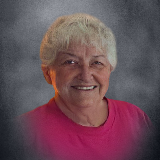 She was born March 26, 1934, to Daniel Rice and Vera Lou (Dray) Waters in Smithville, MO where she grew up and attended school.

On November 3, 1953, she was united in marriage to Raymond Lee Anderson. After their marriage they lived in Liberty and in 1999, they moved to Trimble, MO. Raymond passed away on September 12, 2010.

Juanita enjoyed playing cards, dancing, country music and most of all spending time with her daughter and son-in-law, grandchildren, great-grandchildren, brothers and sisters, other extended family and her furry friends Sammie, Bubba Lee, and Buggsy.

She was also preceded in death by her parents; brother David Waters and twin sisters Evelyn Loyd and Addelyne Moore.

Donations may be made to Reed Cemetery.