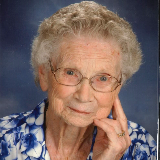 She was born on March 19, 1928 to Roy Vernon and Hermione (Hays) Shipps in Skidmore, MO. Joyce graduated from Gower High School in 1946.

On June 14, 1947 she was united in marriage to Alpha Dewayne Pike. After their marriage they lived in Camarillo, CA for a short time where she was a nurse’s aide for the State Hospital. In 1951 they returned to Gower where they made their home. Her husband preceded her in death on May 13, 1985.

Joyce worked for the Douglas Candy Company in St. Joseph, in 1968 she began working as a cook at East Buchanan and retired in 1993. She was a member of the Ebenezer United Methodist Church where she was an active member and volunteered for 50 consecutive years at Vacation Bible School. Joyce was also a member of the Gower Lions Club since 1997.

Donations may be made to the Ebenezer United Methodist Church or the Gower Lions Club.