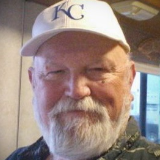 Jim graduated from Smithville High School in 1969 and was a career truck driver. He was also a trained Emergency Management Technician. He had a passion for music and was the lead singer for Badlands for many years. His hobbies included building and flying model airplanes, touring the country by motorcycle and RV, watching old westerns and connecting with people across the country—and the world—on his CB and Ham radios (final sign offs have been made for Sharpshooter and N0NZW). Jim also loved gathering with friends and family and will be remembered as a gifted storyteller.

In lieu of a memorial service, Jim requested that his ashes be spread in the mountains where he and his friends toured over the years admiring the beauty of nature and making priceless memories.