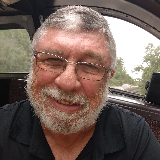 On March 26, 1996, he was united in marriage to Kimberly Ann Koenig. After their marriage they lived in Easton where they made their home.

Jerry was an over the road truck driver and owned Pflugradt Trucking. He was most caring selfless man who would help anyone he could. Jerry enjoyed road tripping, boating, camping, fishing and just being outdoors. He loved his animals and his family and most of all he was an amazing husband, dad and papa.