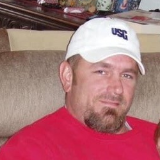 He was born on September 13, 1971 to Ronnie Joe and Judy M. (Andersen) Edwards in Kansas City, MO. Jason grew up in Turner, KS and in 1990 he graduated from Turner High School. He then served his country in the U.S. Marine Corps.

Jason attended Vatterott College where he received his Associates Degree in Electrical Engineering. Jason worked as an electrician. He enjoyed working on cars, fishing and was an avid tool collector. Jason loved spending time with his family and his son Ayden.

He was preceded in death by his father Ronnie Edwards and uncles Lee L. Andersen, Bill Edwards and Bobby Edwards.

Donations may be made to Wounded Warrior Project https://www.woundedwarriorproject.org/donate