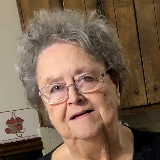 She was born on April 28, 1940 to Woodrow Wilson and Betty Lucille Williams in St. Joseph, MO. She grew up in St. Joseph and graduated from North Platte High School in 1959.

On September 10, 1960 she was united in marriage to Bobby Lee Hensley. After their marriage they lived near Dearborn where they made their home. They recently celebrated their 60th wedding anniversary. Her husband, Bobby, preceded her in death on January 8, 2021.

Tiddle worked for Westab, American Family Insurance and at Nash Gas for over 20 years. She was a member of the First Baptist Church of Dearborn. She enjoyed crossword puzzles, watching the Chiefs, and most of all spending time with her grandchildren and great grandchildren.

Funeral Service: 11:00 a.m. Saturday, February 20th at Hixson-Klein Funeral Home, Gower with visitation one hour prior to the service.

Donations may be made to the American Heart Association.