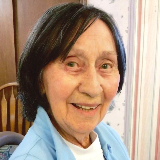 She was born on November 26, 1936 to Francis Morton and Bonnie Belle (Hamby) Jones in Grayson, MO. Margaret grew up in Grayson and graduated from Gower High School in 1954.

On July 1, 1956 she was united in marriage to Walter Bruce Johnson, Jr. After their marriage they were stationed all over the world, and in 1979 they moved to rural Dearborn where they made their home. Her husband, Bruce, passed away on June 15, 2007.

Margaret was an excellent seamstress and was an avid Jeopardy fan. She loved to garden, but most of all loved spending time with her family.

She was also preceded in death by her parents; brothers Ray, John, Roy, and Robert.

Donations may be made to Stony Point Cemetery,