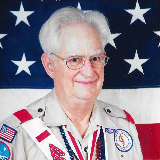 Don grew up in north central Missouri and during the Korean Conflict he served two years in the U.S. Army at Ft. Knox, Kentucky. After returning home, he was employed by General Motors until he pursued a career of 35 years with TWA. He was active in Scouting, church, shrine, Platte County Fair Board, youth baseball, and many other community service activities.

Services will be conducted by the Platte Woods United Methodist Church, 7310 NW Prairie View Rd, Platte Woods, MO on Monday, June 20th with Visitation at 10:00 a.m. and Memorial Service to follow at 11:00 a.m. at the church.