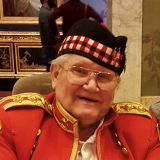 He was born on January 17, 1939 in Co. Durham England where he grew up and went to school.  David served in the Royal Air Force.

On December 26, 1958 he was united in marriage to Ocean Scott.  After their marriage they lived in England where their four children were born.  In 1981,they moved to the United States where they lived in California and Arizona.  While living in Arizona they started 7 Charter Schools.  After their retirement they moved to Kansas City, Missouri to be near their youngest daughter, later moving to Smithville.  David owned and operated the Midwestern Kilt Company.

David was a member of The Church of Jesus Christ of Latter-Day Saints in Kansas City.  He was also the Chief of the Clan Gordon.  David was a very creative, talented artist and musician.  He was a loving husband, father, grandfather and friend.