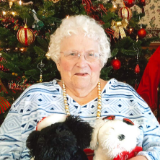 She was born on October 20, 1931 to Emil Otto and Elsie Sabina (Fuelgraff) Schultz in St. Joseph, MO. Darline grew up in St. Joseph and graduated from Lafayette High School.

On September 1, 1956 she was united in marriage to P. Paul Hanway. After their marriage they farmed near Faucett where they made their home. Her husband, Paul, passed away, August 1, 2011.Darline was a member of the St. Francis Catholic Church in St. Joseph.

She was also preceded in death by her parents; and her brother, Norman Schultz.