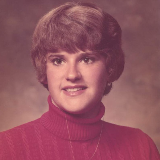 She was born on January 26, 1960 to Warren Keith and Phyllis Nadine (Petty) “Judy” Lewis in St. Joseph, MO. Brenda graduated from Union Star High School. She was in the 6 year Med Program at UMKU and studied for her Masters in Biology from Missouri Western State College and KU.

On October 4, 1987 she was united in marriage to Richard Wayne Brookshire. After their marriage they lived in San Diego, CA, Japan and in 1992 they moved to Gower where they made their home. Brenda worked for Children’s Mercy Hospital in Kansas City, MO and Spelman Memorial Hospital in Smithville, MO. She loved spending time with her family.

She was preceded in death by her parents Keith and Judy Lewis.