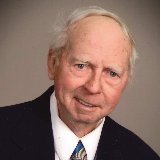 He was born on June 22, 1940 to Carrel Winfred and Martha Ellen (Thompson) Harmer in Edgerton, MO. He grew up near Edgerton and graduated from Smithville High School in 1958. He then served his country in the U.S. Army during the Vietnam War.

On November 18, 1967 he was united in marriage to Marion Waters. After their marriage they lived in Pittsburgh, PA, Trimble, MO, Grayson, MO and in 1972 they moved to Gower, MO where they made their home. His wife, Marion, preceded him in death on January 8, 2017.

Boley was an active member of the First Baptist Church in Gower where he served as Deacon, taught Sunday School, and never missed a potluck meal. He was also a member of the Gower Lions Club and the Gower American Legion. Boley enjoyed watching Westerns, fishing, camping, and riding his motorcycle.

He is survived by his children, Paul and Louise Harmer; brother, Robert Harmer; sisters, Mary (George) Gieringer, Joyce Kissick, Charlotte King, and Lenora Molder; many nieces and nephews, other relatives and many friends.

Donations may be made to the First Baptist Church Kitchen Ministry.