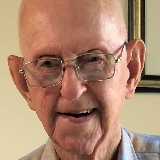 He was born on March 24, 1932 to Samuel C.F. and Dorothy Ellen (Belcher) Hensley in Camden Point, MO. Bobby grew up and attended school in the Dearborn. He then served his country in the U.S. Army during the Korean War.

On September 10, 1960 he was united in marriage to Iva “Tiddle” Williams. After their marriage they lived near Dearborn where they made their home.

He drove a motor grader for over 40 years working for MODOT for 18 years and retired from Platte County Road and Bridge after 22 years. He enjoyed manicuring his yard with his John Deere Mower, keeping his car spotless, and playing country music with his friends. Most of all he loved spending time with his children, grandchildren, and great-grandchildren.

Bobby was preceded in death by his parents, brother Donald Gene “Scrooge” Hensley, and his granddaughter, Makenzie.

Donations may be made to the Alzheimer’s Association.