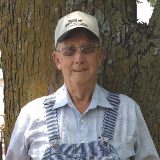 He was born on July 3, 1932 to Harry Hobert and Lottie Minerva (Swindler) Mann in Lathrop, MO. He grew up near Gower and in 1951 graduated from Gower High School.

On January 5, 1952, he was united in marriage to Wanda Ruth Randol. After their marriage they lived in rural Gower where they made their home.

Bill attended Grace Evangelical in St. Joseph, MO.  He worked for Everett Quarries for over 30 years, but his passion was farming. He enjoyed taking care of his family and has spent his last years caring for his wife Wanda.

He was preceded in death by his parents; brother, Leasol Mann; and sisters Lorene Barton, Helen Stanaland and Marie George.