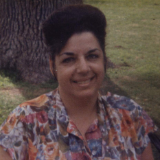 She was born on January 25, 1943 to George Christopher and Yolanda (Borrello) Drake in Newark, New Jersey. Barbara attended school and grew up in Venice, CA.

In 1990 she moved to Liberty, MO and later moved to Kearney where she made her home.  She owned and operated Busy Bee Cleaning in Liberty for many years.

Barbara was a member of the Liberty Pentecostal Church where she provided nursing home ministry for several years.

She was preceded in death by her parents; her husband, Edwin Clopton; and sister, Christine Drake.