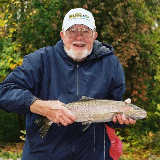 Graveside service will be held on Wednesday, May 19, 2021 at 1:00pm at Resurrection Catholic Cemetery in Kansas City, Missouri.

After graduating from high school in 1945 Vic attended Ohio State Universality. He was a member of the Delta Upsilon Fraternity. Moving to St Louis Missouri in 1947, he went to work for the Cook Paint & Varnish Company. He met his future wife, Martha Offutt while living in Webster Grove MO. They were married June 29, 1949 and lived in Webster Grove before moving to Detroit Michigan to work in sales for the Cook Paint & Varnish Company. Vic was transferred to KCMO in 1961 as a department manager for the Company.

His life was touched a little deeper in 1965 when he made Cursillo #45 directed by Father Frederick Abret F.M. (sp). Vic was very active in the St. Charles Borromeo’s St Vincent dePaul Society for years as secretary and then president. He went on to with KC Particular Council going thru all the chairs and became President of the K.C.-St. Joe Particular Council in 1981. He had the pleasure of working with Bishop Helsming and Mrs. Bernard Koening, spiritual directors as well as all the other wonderful men and women of St. Vincent dePaul. Vic had a deep faith and his love for God showed in his daily life.

He will be remembered for his zest for life and his memory will always be a blessing.

Vic was preceded in death by his wife, Martha, after 55 years of marriage.

In lieu of flowers, Vic has ask that contributions be made to St. Charles Boromeo’s Church and School building fund.