In Remembrance of Nina Payton 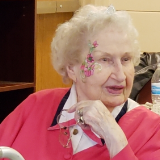 She was born on July 31, 1923 to Leonard Singleton and Lura Elizabeth (Cooper) Norris. Nina graduated from Osburn High School in 1941.

Nina was united in marriage to Willard David Payton, Jr. After the war, they made their home in the Smithville area. Her husband preceded her in death in 1993.Nina was a seamstress, teacher and catered weddings for many years. She and her husband owned and operated Payton Tops Industries in North Kansas City. Nina was the author of two children’s books illustrated by her nephew, Doug Ransdell.

She was also preceded in death by her parents, twelve brothers and sisters; and her daughter, Elizabeth Blackwell.

Donations may be made to Hixson-Klein Funeral Home.